Established in 1964, Newman College, Thodupuzha is a first grade college affiliated to Mahatma Gandhi University, Kottayam. It is a minority Christian institution governed and managed by the Corporate Educational Agency, Syrian Catholic Diocese of Kothamangalam. Named after the great educational visionary, John Henry Cardinal Newman, the college is instituted to cater to the educational needs of not just the Catholics, but of all communities without discrimination of caste, creed, religion or other considerations. The college seeks to serve certain important social ideals. These include the inculcation of spiritual and moral values in students and imparting training in socially productive services intended to mould socially responsible citizens. The college is located at the doorstep of Idukki District in the Western Ghats. The total land area   possessed by the college comes to 26 acres. It is an aided institution which also runs a few courses of the Indira Gandhi National Open University (IGNOU) through distance education mode. The college is recognised by UGC under sections 2(f) and 12 (b). The college was reaccredited by NAAC with ‘A’ grade in two consecutive terms 2007 and in 2016 with CGPA3.32. The college now offers fourteen undergraduate programmes, eight postgraduate programmes and two research programmes. The college also runs two diploma courses under the UGC sponsored Newman Community College and another diploma course by the Department of Continuing Education, Govt. of Kerala.

The college has a qualified permanent teaching faculty strength of 53 out of whom 26 have Ph.D. and 12 have M.Phil. as their highest qualification. There are 19 guest lecturers and two project fellows. There are also 19 members on the non-teaching staff. Eight members of the faculty serve on the Boards of Studies in various subjects in the Mahatma Gandhi University. Five teachers are approved Research Guides under the University. There are 9 Research Scholars doing Ph.D. under the supervision of our faculty members. The teachers have undertaken 29 Research Projects sanctioned by various agencies like U.G.C, Indian Council of Social Science Research (ICSSR) and Kerala Council for Science, Technology and Environment. Two Major Research Projects and Five Minor Research Projects are completed and four Major and sixteen Minor Research Projects are ongoing. The teachers have an extensive list of publications in national and international journals. Ten memorial/endowment lectures are instituted in the college.

The college publishes three academic journals; two of them are bi-annual. The student strength of the college in 2015-2016 is 1970. The new initiatives of the Kerala Government in higher education like Additional Skill Acquisition Programme (ASAP), Walk with the Scholar (WWS), and scholar Support Programme (SSP) are of great help to the students in strengthening their facilities. Co-curricular and extracurricular activities are also given adequate importance with that of curricular aspects. The college has a web-enabled Central Library with over 59000 titles in various disciplines. The college is regularly publishing three academic journals with ISSN numbers. As many as 29 research projects are being carried out by our faculty members. The faculties have authored 16 books and more than 155 research papers in international and national journals. The college regularly conducts ten memorial/ endowment lectures every year and eight inter-disciplinary seminars and over 20 invited talks by experts, on an average. The NCC Unit of the college won “the best NCC Unit Award” of Kerala Lakshadeep Directorate. 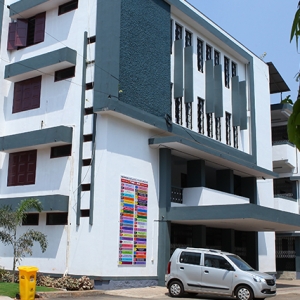 The college has been selected by the Department of Science and Technology, Govt. of India, for financial assistance under its FIST programme with a budget outlay of Rs.90 lakh. On infrastructural front, the college has state of the art facilities. It has four air-conditioned conference halls, nearly 150 computers with peripherals, six photocopying machines, 16 DLP projectors, four refrigerators, digital duplicators and inter-active boards, among others. The English language laboratory named, “Msgr. Palamattam Centre for English Communication”    with    30    web    enabled computers is a centre for training students in the use of correct English. The Ladies’ Hostel, Cafeteria, Post Office, M.G. University Study Centre, M.G. University Information Centre, IGNOU Study Centre, Staff Co-operative Society, Electronic   Equipment   Maintenance   Centre, Chapel, Counselling Centre, Bank, ATM Counter and Book Stall, Multi Synthetic Court are the other facilities available on the campus. The college administration is assisted and advised by the Governing Body, Staff Council, Parent Teacher Association, alumni association. The college runs mass programmes and activities to elicit ecological awareness such as Biodiversity Park, organic farming, vermicompost, plastic recycling unit and other sanitation activities with the help of public and members of NSS and NCC. The college manages a recreational space for the students called Kalam Park which is named after Dr. APJ Abdul Kalam, the former president of India who visited the college in 2005 December 18. The College has recently achieved the national and international fame by getting into the lime light of scientific expedition mission in field of astronomy. Dr. Joe Jacob, Associate Professor in the Department of Physics included in the team of Indian Astronomers have identified an extremely large super cluster of galaxies and have named it ‘Saraswati’. He is also the Co-Investigator in the three year Indo- French Project on Radio galaxies conducted at Inter University Center for Astronomy and Astrophysics (IUCAA), Pune. In the background of all these achievements we are still continuing our mission to go further to educate people and strengthen our involvement in the nation building process.